Well there were 2 things that I wanted to do this winter, and of course they both happened on the same day. First was the chili cook off at Wilkins. I made the chili in the morning while I was having coffee. It was just a off the cuff recipe. It did taste pretty good but I didn't think that it would be a winner. Anyway I asked Georgie if she would take it up to the dealership for the judging. I guess that first place isn't bad, I happy that Georgie got the chance to be in the spot light. none of it would have happened if she hadn't gone up. 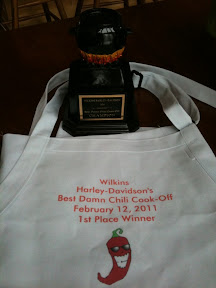 and while the judging was going on I was at the Lodge getting ready for the Fish Fry. being my first year, my job was to cut and bread the fish and put it in a waiting basket to be fried. Not a bad job but very tiring after 300 ponds of fish.