Navy SEAL Jon Tumilson lay in a coffin, draped in an American flag, in front of a tearful audience mourning his death in Afghanistan. Soon an old friend appeared, and like a fellow soldier on a battlefield, his loyal dog refused to leave him behind.

Dean and I made the Toy Run on Saturday. 900 bikes and slow ride through Barre and Montpelier. First time in 25 years that the Governor didn't meet us at the state house. I would guess that there weren't many of his supporters in attendance. 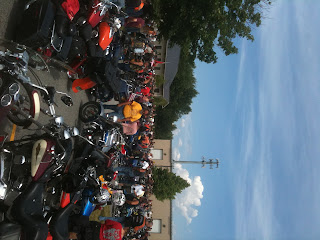 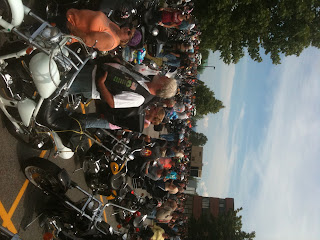 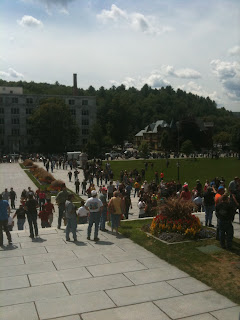 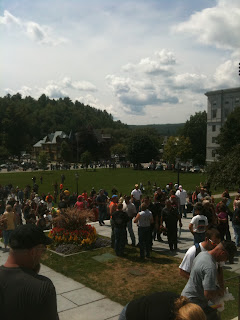 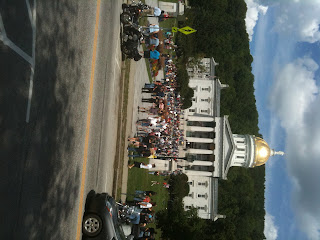 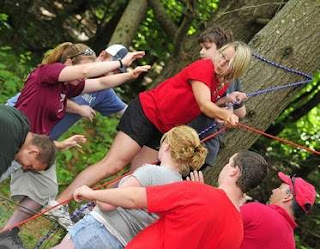 They call it the The Transition Program.

Designed for at-risk kids about to make the move from and middle schools into bustling later this summer, the program is much more lively and innovative than its name would imply.

Located high and remote in the hills of Brookfield at Midnight Mountain, the home and horse farm of married couple Georgie Stapleton and Brian Locke, it seems like an unlikely setting to help kids make a successful transition from one brick-and-mortar school building to another.

There’s a horse corral, dense woods, a pond and a rustic barn next to a white clapboard house. With an atmosphere more like a summer camp than a “program” — no academics taught here — the six-day second half of the Transition Program this month, building on a three-day session in May, takes a closer look to understand what’s going on.

The Transition Program might consider changing its name to Self-Awareness Camp to promote the number one skill taught here.

“One of the first things we teach is to feel your feet on the ground. What am I feeling right now? Stay present as yourself even as you have to feel the emotions of others,” said Stapleton.

Stapleton, in her day job, works for Washington County Youth Services Bureau. She gets help from Locke, who is a manufacturing engineer and performance artist (his license plate is “CLOWN”) and Tom Murphy of , who co-founded the program three years ago with Stapleton.

Many of the roughly two dozen kids involved in Transition Program this year have faced more unpleasant changes and uphill battles in their childhoods than many outside of the program face in an entire lifetime. Most of the kids have had little chance to relax with their peers or to put aside how other students in school react to the obstacles they face. Learning disabilities, speech impediments, physical and sexual abuse trauma histories and multiple foster care placements are just a few of the challenges faced by kids in the program.

By design, The Transition Program little resembles a classroom with its horse-handling ring, ropes course, and improvisational comedy and body movement workshops. There are also campfires and storytelling before lights-out.

Another dimension is the inclusion of a few Spaulding teachers as camp counselors, allowing some of the students to start forming relationships with their soon-to-be teachers: A real lifesaver once they’re thrown into the big pool of high school.
ac
Ryan Malone, 15, of went through the program last year and is back for a second stint, but this time he is a student leader in the program. Malone boldly went before the school board and lobbied for the program’s funding to be sustained, telling school directors that he gained the confidence to handle a half-ton horse in the program and as a result, could handle the taunts of a bully in school.

“I also learned communication skills and I learned concentration skills,” said Malone recently as he watched another student take that horse around the ring at . “I’m getting better. I know I am because people are telling me that I am.”

Rebecca Benoir, 14, of Graniteville, stepped out of the corral where she’d been working with a palomino quarter horse named Shelby, first with Stapleton in the ring with her, and then by herself. Benoir joined Malone and a half-dozen other students watching outside the ring.

“I was a little nervous at first, it’s so big, like 1,000 pounds, but after I saw she was relaxed, she’s calm, I knew that I should be calm, too,” said Benoir. Benoir admitted the horse has a little bit of attitude, but that she had to stay steady and firm in her commands to get results.

Over at the ropes course, the kids took a break from spotting each other on low ropes suspended above the forest floor from a circle of large trees. They played a strategy game where you can’t see your own three playing cards, but you can see everyone else’s, and you have to try to line yourself up sequentially with others by the numbers on the face of the cards. The group, mostly students but with two counselors, lined themselves up perfectly after a few minutes of sideways glances and rearrangement.

Tyler Therrien, 15, of Barre, in the end, put himself first in the line-up and explained afterward that he watched how others were lining up, and their reaction to his movements, to figure out his place. These and other games teach students to be aware of subtle (and not so subtle) signals from others in a social environment, and respond appropriately.

At the other side of the horse pasture, in the house, Murphy was playing “freeze” with a group of kids and two Spaulding teachers, P.J. LaPerle and Nick Connor. In alternating fashion, adults and students would go up in front of the others with an object in hand and improvise act until someone in the group yelled “Freeze!” and the actor would have to change his routine.

After much urging and suggestion, then outright prodding and finally lead acting from Murphy, Casey DuBois, 15, of Barre Town slipped into acting in reaction to Murphy’s movements and had everyone laughing and surprised.

Murphy explained to the kids that sometimes they have to push themselves past what is comfortable and familiar to find something inside that they perhaps didn’t know they had.

At the end of the afternoon, with some of the kids swimming in the pond, and some lying on the grass chatting with some of their soon-to-be high school teachers, it was clear that, despite the day’s difficulties and challenges, the kids were left relaxed and maybe even a bit pleased with themselves. Perhaps, the skills they gain in The Transition Program might be useful out of more than just that difficult leap into high school.a

Took a ride up home with Georgie 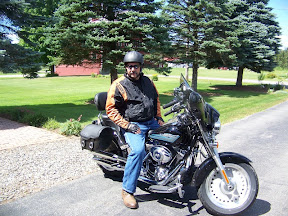 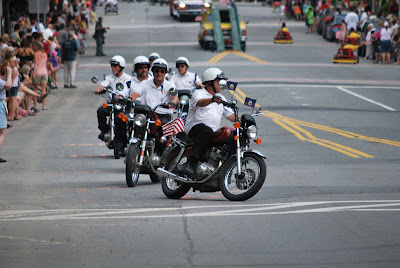 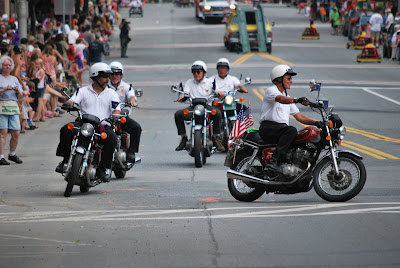 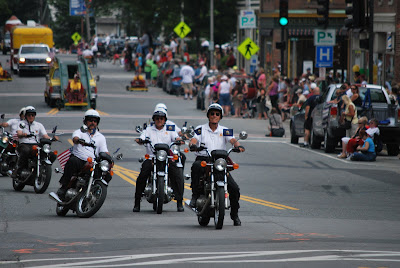 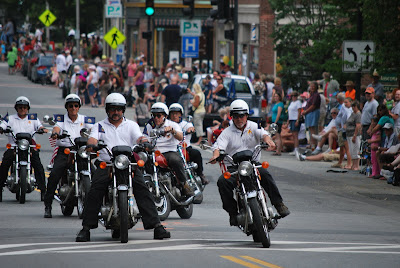 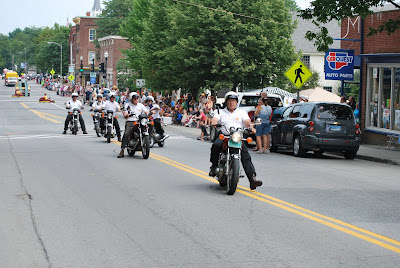 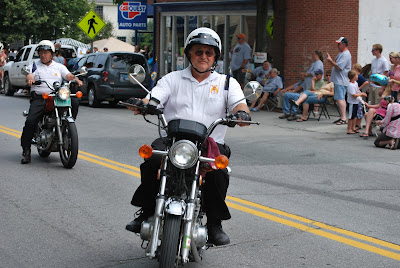 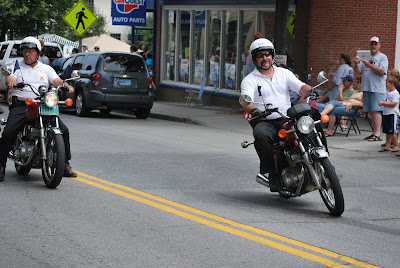 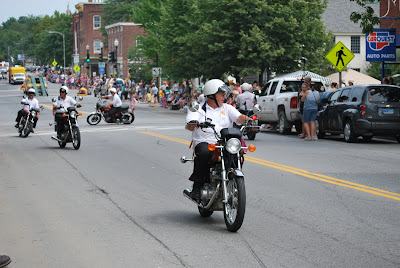 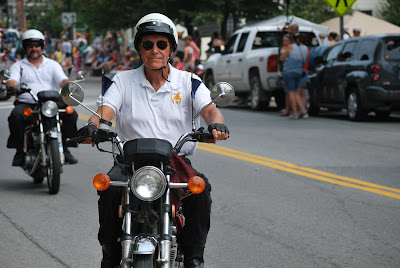 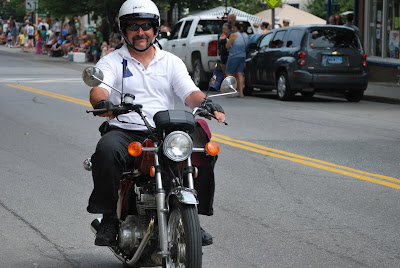 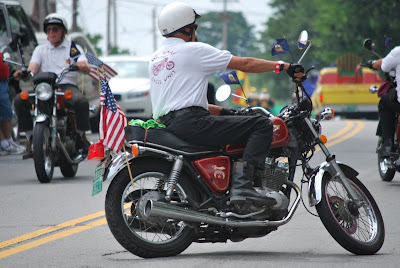 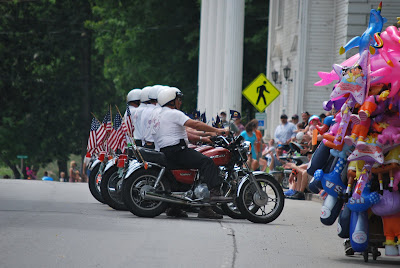 Well on the road at 6:30 to start my ride to remember. It had rained last night and there was a heavy fog in the valleys. Slow ride down the hill and onto the blacktop, get the mud off the tires and let the thunder roll. Headed down to East Randolph and over the Chelsea Mountain road over to Tunbridge, home of MSgt Tom Stone. I picked up my first hero 2nd Lt Joseph Fortin. Now riding in good company I past the Tunbridge fair grounds, the sun was just staring to burn through and shower the valley in a yellow glow. I head down to Sharon, the home town of Sgt Carton Clark, there I picked up LCPL Adam Strain. Now time to get out of the fog so head up the W. Hartford - Quechee Rd. a nice twistie road that will take me out of the valley and into Quechee the home town of LCPL Jeff Holmes, I pick up Sgt. Justin Gravey. With my three riders I have a long run to make up to St. Johnsbury to continue my ride. I get onto the interstate roll on the throttle and sit back and relaxed. With time to think the magnitude of this ride starts to hit home. These men gave there lives for freedom, not here but in some far away land. They were sons, brothers, fathers. These are heroes by my definition, "to do what needs to be done, regardless of the consequences". They are all from towns that I have been to before, but not for the same reason. As I ride I wonder what kind of men these heroes were, who there friends were, what these towns were like through there eyes. The sky is full of dark clouds now and I expect that I will be getting wet, even though I can see clear skies to the west. I do run into a little rain in Bradford but not enough for rain gear, out of the rain in Wells River. I get of in St. Johnsbury home of 2Lt Joey Fortin. There wasn't much going on in the downtown, a few people at the gas station filling up or getting coffee. I pick up LCPL Jeffery Holmes. Now for a short ride over to Danville on Route 2. The sun is know out and the clouds are burning off. Danville is typical small Vermont town and is the home town of Cpl. Ian Muller. I pickup Sgt. Steven Deluzio. I need to go to Walden which is the home town of SSG Tristen Southworth. Be cause Walden is such a small town there is no official stop on this ride, but I want to stop anyway to pay my respects. Now onto Hardwick the home town of Spc Scott McLaughlin and SSG Chris Merchant. A hopeful town that is starting to rebuild after the end of a logging and granite industries and loosing many buildings in the downtown to fire. I pickup Sgt. Josh Johnson. Now onto East Montpellier, which is a nice road to ride, smooth, hilly and scenic. East Montpelier is the home town of SSG Jamie Gray. Its time to take a break, I've been riding for 3 hours and need to stretch. I pickup Sgt. Michael Voss. I am getting toward the end of my ride. I decide I want to make two more stops. I head over to Norwich, which is the home town of Col. James Moore and Maj. Robert Soltes. and the home of the oldest private military academy. I pickup SSG Jesse Strong. I am now done with my ride except one more stop in Randolph Center at the veterans cemetery for my last stop to say good bye to my riders before going home.

I want to give a special thanks to my friend Joe Oliver from California who sponsored me on this ride with a donation to the Vermont Fallen Heroes Memorial. Joe and I served together in the Army 20 years ago. Thanks again Joe. 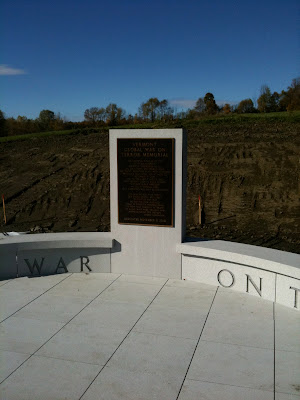